With relegation to division 2 looming and with a last minute depleted team , Ojays hosted the final round of the Speedo League at Whitgift (Croydon). The three line whip was enforced due to dwindling numbers. Before the Gala, Orpington were placed in joint last position, and required nothing short of a miracle to survive relegation. We needed 3rd place or higher! The Gala started well; however when the first points were announced we were in 5th position and Simon suffered a nervous breakdown! But with exceptional character the team fought back. We had 12 first places (13u boys medley team, Mens Open Medley and freestyle teams, Matt Perkins, Hazel Colbourne, Blake Lewis, Gemma Leggett, Emily Coe and James Lawrence & Phil Kent), 12 individual pbs and 11 relays bettered previous performances. The Final points were as follows:- 6th Burgess Hill 112 points 5th City of Canterbury B 146 points 4th Ashford Town 188 points 3rd Bromley 190 points 2nd Orpington Ojays 191 points 1st Epsom District 218 points These final positions should mean that we remain in division 1 next year. All swimmers gave 110% in all the races, and in supporting the rest of the team. This lead to a truly remarkable result - WELL DONE. Special thanks should go to Phil (for flying back from Scotland), Joe Heaney and Mike Bond for leaving their sick beds to swim, and Katie Coad (for attending with 3 hrs notice) also Matt Perkins for coming out of semi-retirement!!! Thankyou also to all Officials and helpers, particularly to Janet Leggett who organised the whole event.

Three of our swimmers competed at the Dartford Open on Sunday 3rd December: Grace Williams, Jack Quinn and Louise Davison. They had a very successful day with Grace gaining 2nd place in the 14 years 100m freestyle and 4th in the 100m back with a new 4 second PB in the backstroke. Jack gained 2nd place in the 14 years 100m breast and also did a 2 second PB whilst also doing a new time in the 50m fly. Louise gained 5th and 6th places respectively in the 50m back and 50m frontcrawl in the 9 years age-group. Well done Louise who is one of our youngest competing swimmers! Well done to you all and also for turning up in the apalling weather!

Four swimmers represented Orpington Ojays at this year's Kent Development Meet at Gillingham. All swam really well and enjoyed gaining invaluable competition experience. Michael Luttners-Tickner and Louisa Sampson swam the 50m Freestyle and 50m Breastroke events while Anna Tompsett swam the 50m Backstroke & 50m Freestyle. Shauna Hancock swam the 50m Freestyle, 50m Backstroke and 50m Breastroke. Well done to all of the above swimmers who acheived personal best times in all of the events they entered. Let's hope we see more of your Ojays colleagues at the meet next year! 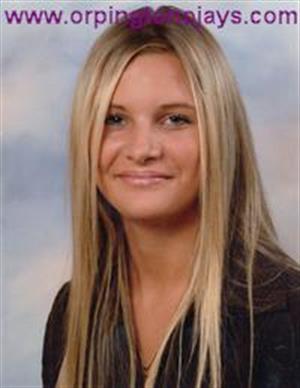 On Tuesday 7th of November Gold squad held a sponsored swim at the Walnuts. The two charities to benefit were The Phoenix Centre (Children with Special Needs) and Carley Furness (The 17yr old who was stabbed in Orpington on 30/09/06) The swimmers swam non-stop for one hour and between them covered 42,733.3 metres. This raised a total of £1,200 which was split between the two charities and the cheques were presented on the 16th of November. Congratulations and well done to Gold squad and their sponsors who together have raised over £4,000 for charities in the past 3 years. 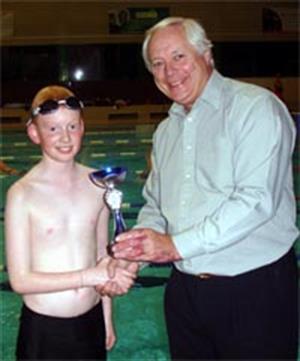 Congratulation to Daniel Benjamin on winning the Endeavour Trophy (highest placings without winning a medal) at the recent Bromley Borough Gala held at the Spa, Beckenham. Daniel was presented with his trophy on poolside at Walnuts on Monday 20th Nov by Barry Chick from Swim Bromley.

Well done to all swimmers who have participated in the North Kent Junior League this season. We have done ourselves proud with a very close finish between 1st and 2nd place (2 points!) and came 2nd overall in the League (to Bromley). There were some very impressive swims on Saturday night and 12 new PBs. Well done to all. Many swimmers swam several races due to shortages of availability. Your spirit and that of the whole team is to be admired. Many of our relay teams also swam faster than last time. Let’s hope we can make it a first next year! Thank you to all our officials and helpers too, Nick Harvey, Steve and Debbie May, Sarah Coe. Results on the Notice Board this Monday evening (20th November)

Ojays came up against very tough opposition from much larger swimming clubs in the second round of the Speedo last night. We competed against Staines, Haywards Heath, Croydon Amphibians, Epsom district and 1066 swimmers. There were fine performances all round resulting in improvements in times in 12 out of 16 relays. There were 15 individual PBs. First places were gained by Hazel Colbourne (100 Open freestyle and backstroke), Emily Coe (100 breaststroke, 15 and under and Open with a 3 second plus PB!), Matt Perkins (100 Open fly). For all our great performances on the night we could only achieve 6th position. These results show that those swimming are improving well presently and are in good positions to do well in future competions Keep it up! Simon

Click on the link below for a full report on the Barcelona Training Camp last month.

The 2006 National Masters Championships at Sheffield held over the last weekend of October was attended by five of our masters. Training with commitment and focus over the last few months paid off with tremendous swims and places. Richard Smith produced well deserved personal best times with 7th, 8th, 9th 12th and 14th places. Mark Hawkins managed 8th, 11th and 15th places but still his target of less than 30 seconds for 50metres fly is waiting to be smashed. Emma Hulls has been plagued by illness over the last few months but still achieved 2nd, 3rd, 4th and 5th and as always her reaction time off the blocks was the best in all her events. Alison Nye, our gold medallist, was happy with her 50m swims with 4th and 5th and a magnificent 1st place in the breaststroke. The 100metres breaststroke produced an excellent 4th place but Alison has much more to offer in this longer distance and fully intends to work on this area. Martha Feeley, our Platinum Squad Coach took on a relatively new challenge in the 400FC producing an excellent 4th place and 7th in the 200IM and must be congratulated on her ability to work full time, train one of our squads and also fit in her own training. Our relay team with a total age of 160 years produce 3rd in 4 x 50 FC and 6th in the 200IM. Congratulations to the team and let’s hope this encourages more of our tremendously talented masters squad to participate in competitions. 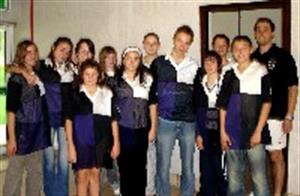 15 swimmers took part in the White Oak Open Meeting on the 8th October. There were a total of 21 PBs (some very substantial!) with Claire Spearman, Oliver Bates and Oliver Coe achieving first places in 100 Breast, 100 Back and 100 Back respectively. Louise Davison swam her maiden gala and did herself proud. Out of a total of 17 teams, Orpington O-jays came 6th which was a fine achievement. Congratulations to all participants: Louise Davison Emily Davison Alexandra Chrysostomou James May Sam Harvey Oliver Coe Sarah May Emily Coe Rachel Dickerson Ellis Marsham Grace Williams Oliver Bates Gemma Leggett Rebecca Harvey Claire Spearman Results and times will be on the notice board on Monday evening 9th October. 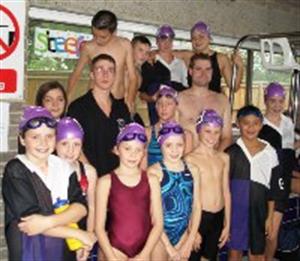 Phew! What a fantastic evening we all had last night at the Captains Gala. Swimmers of all ages and experience competed against each other in 4 teams. These were lead by Club captains and Vice captains, The Kents, The Nyes, The Colbournes and The Steeres. The evening provided a number of excellent swims and personal best times. There was close competition in all events. There were some swimmers that had never swum competitively before and they are to be congratulated on their performances. The points were close throughout and the Steeres finally finished in pole position and took home the trophy. Thanks to all those who officiated and to the parents of those taking part, all who provided an excellent atmosphere. Thanks to Helen for organising the whole evening which indeed was a fantastic way to finish her term as Head Coach.

South East Region Masters Age Group Competition took place on Saturday 23rd September with five of our Masters looking for good swims. Gina Charleton, Georgina Berry, Alison Nye, Richard Smith and Mark Hawkins travelled to Haslemere and brought home a massive 4 golds, 5 silvers and 4 bronzes between them. Alison, up to her usual high standard took 3 gold and a silver, Richard 1 gold, 3 silvers and 1 bronze, Georgina silver and bronze, Gina silver and another personal best time Mark a bronze and 2 fourth places. The freestyle age group managed bronze place with all ages having make 120 years. Well done to our Master and keep up the training.

Well done to all our swimmers in the 2nd round of the Kent Junior League held at Southborough Pool on Saturday 16th September. It was a nail-biting evening with final points very close between the teams. Congratulations to all those who achieved PBs at this time of year when we have just started back after our summer break. We had a total of 16 PB’s. Of particular note, is Ellie Miller taking 7 seconds off her 100m breast stroke time, Sam Harvey taking 4 seconds off his 50 m fly time and Molly Matthews taking 4 seconds off her 100m breast stroke time. Oliver Coe broke his 100m breast stroke time at the Division 11 Trials competition the night before and then broke it again at the Kent Junior League!! Well done Oliver! Thank you to you all. You swam your hearts out and we are very proud of you. Here’s to the next round and some more good results now that we are back to full training. Thank you to our team managers, Steve May and Sarah Coe, to our time-keeper, Nick Harvey, to our pool-side helpers and to our coaches. WELL DONE! Final Points: Bromley 213 Edenbridge 197 Orpington O-jays 192 Maidstone 184 Ashford 179

A big welcome to Jo, our new coach who has started with Orpington Ojays last week. Jo is a previous Ojays swimmer and a is Level 2 Teacher/Coach. She will be working with Martha and Platinum Squad as well as Eve and Gold Squad. I am sure that we all wish her well her at Ojays and look forward to her making a positive addition to the already excellent coaching team we have here. 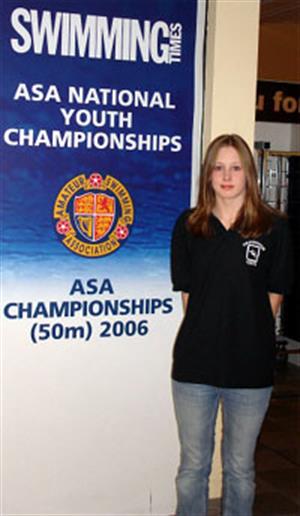 Hazel Colbourne travelled to Ponds Forge, Sheffield to take her place at the Youth National Championships on 1st August. With the highest level of British swimmers competing the standard was extremely high. Hazel produced a magnificent swim, well paced, which showed in the split times. Her final time was within half a second of her submitted time which gave her a place in the middle of the 100m front crawl event. Hazel is a great role model for our swimmers, her commitment to training enables her to compete at this high standard. Well done Hazel we are all very proud of your achievement.